If we ask Africa travelers which animals they really want to see necessarily, then antelope, porcupine & Co are rarely high up on the wish list. But what would Africa be without its huge wildebeest herds? Nowhere do we find large mammals in greater variety and number. Since thousands of years the wanderlust of over 1.3 million wildebeest between the Serengeti (Tanzania) and the Massai Mara (Kenya) is unbroken. With luck, collections of hundreds of thousands grazing wildebeest and zebras can be observed in one spot. 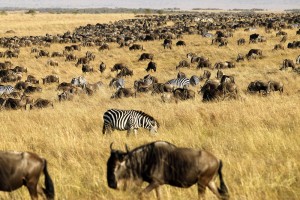 An image that is accompanied by the distinctive soothing wildebeest sound. A wonderful mix of tones. Females snort and grunt, young animals bleat and males give quacking sounds. Encounters that make you a fall silent. We drove around the Mara Rivers around for hours and could not get enough. For a short time Leo & Co were forgotten.

We are always amazed anew on how a migration starts. Thousands of animals are grazing on the savannah. Suddenly one wildebeest of the herd leaves, a second and third follow him in a single file. They form a “wildebeest-line”. Little by little, the grazing herd dissolves and leaves to the next feeding place. If there is interference, for example by predators or human influences, the line tears off and it comes to traffic jam. The animals in the successive line are disoriented for several minutes. But a short time later they find connection to the rest of the moving herd. 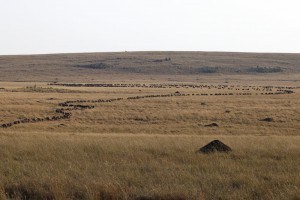 However, the spectacle is very impressive when large herds on the banks of a river jam. The observer often waits for hours and eagerly hopes for a river crossing. More and more animals gather on the shore. The dust clouds are becoming denser. Newcomers are pushing from behind to the water, where huge crocodiles are lurking for a meal. When a wildebeest jumps, the spell is broken and many of its follow. But it also happens that the group of wildebeest dissolves and the hours of waiting were not worth it. Then only the hope for a later remains.

Our long-awaited wish is to experience a river crossing of wildebeest and zebras. To witness this magnificent natural spectacle ONE TIME! Our largest wildebeest group consists of only 600 animals. And these have chosen a stony, although relatively flat, place on the river bank for the crossing. But there are rapids. One of the wildebeest cattle is caught by the current and has problems to reach the shore. His mother comes to him. A deadly decision. The calf finally saves itself to the shore, but the mother is caught by one of the lurking crocodiles, dragged under water and drowned. Since wildebeest adopt no children, the fate of the calf is also sealed. Despite such experiences, migration has a high addictive factor. For us it is certain: the wildebeest on the Mara River will see us again. 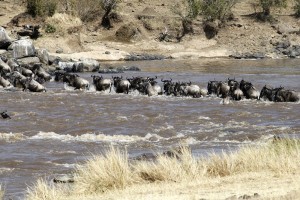 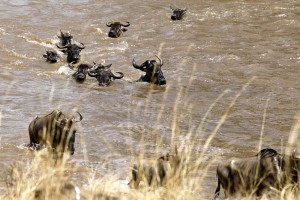 A constant companion to our photo safaris are hippos. A hippo is one of the heaviest terrestrial mammals and appears quite awkward with his body length up to five meters and its round body. As they squeal so peacefully in the water or on the sandy riverbank, the idea is hard to graps that they can speed up to 50 km/h. They only need an occasion. But then!

But don’t dare standing at a waterhole covered with water hyacinths and photograph relaxed, without paying attention to the uninhabited neigbor pond. As fast as a lone bad-tempered hippo is coming out of the water in our direction, just as much time is left to flee and climb up the embankment. The open mouth with tusk-like canines and the aggressive tones leave no doubt of the displeasure of the heavyweight. In most cases, this is only a feint attack, as in this case. But they are no less impressive and instructive. We got the idea. We understood the message. 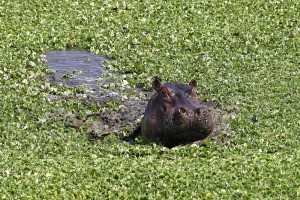 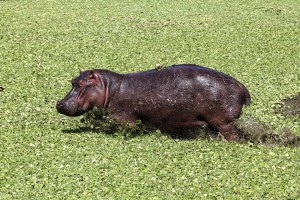 It is not the only hippo experience on this day. At 50 km/h we drive around the open and very uneven terrain. We want to be on time for lunch at the camp. Since 30 minutes, we try to convince our guide that something is wrong with one of the rear wheels. Without success. Then it happens: we only have three fixed wheels beneath us. 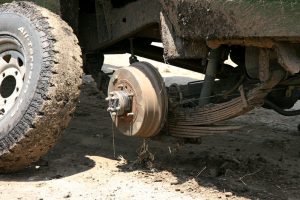 Huge luck in misfortune: We are just in front of our river, which we always have to cross when we reach the camp and leave again. This happens four times a day. Also today. But before the crossing we borrow wheel nuts from another car, mount the wheel and then start the river crossing. We welcome a group of hippos which live not far from the crossroads. Their excrements adorn the water surface. This is only 30 cm below our window. The car hops over the stones in the river. We close the windows. The fragrance is powerful. A crippling thought shoots through our heads: What if we had lost the wheel a minute later, in the middle of the river ???? Who would have left the care? We would have not! 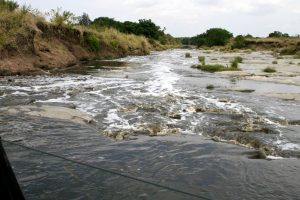 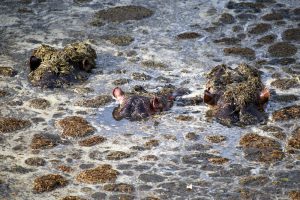 Another unforgettable experience is a balloon ride over the Mara. We start in the dark. The sun is gradually conquering the horizon, bathing the landscape in a warm light. The gaze sweeps over the infinite space again and again. The balloon glides silently over the grazing herds. Just beautiful. 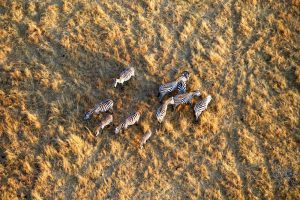 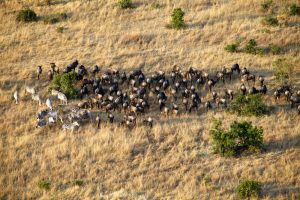 Unfortunately, this trip also comes to an end. But: we will come back!

MammalsSaturday, September 2, 2017Herzog
Copy Protected by Chetan's WP-Copyprotect.
We use cookies to ensure that we give you the best experience on our website. If you continue to use this site we will assume that you are happy with it.Ok