We are standing at the border to Zimbabwe and “donate” a three-digit sum in US dollars to Mister Mugabe, to be able to enter the country. Everywhere big posters of Mister Mugabe and his loyal government, mostly members of his family, stare at us. We are overcome with an uneasy feeling. In the past we have decided not to support the Mugabe clan with those kind of donations anymore, this has been over eight years now. Still we are standing at this border again and donate. In the end the curiousness about the country, its people and the development in the last eight years outweighs everything else.

A lot has changed in the touristic centers in the last years. The supermarket racks are full to bursting, you can get almost everything. The gas stations have access to enough gasoline and a number of structural measures have helped Victoria Falls to a new appearance. 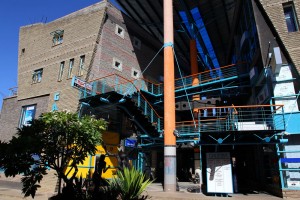 A 50.000 Zimbabwe Dollar note is small change in your wallet. By now you can only pay with foreign currencies.

You don’t need to carry your money in a pushcart around anymore. Those have been observations from a touristic point of view. For the people in Zimbabwe not a lot has changed.

Zimbabwe is beautiful, also thanks to its majestic Zambezi, 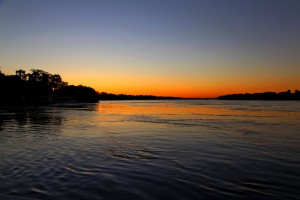 the Mana Pool national park full of animals and the impressive Victoria Falls. We have seen the widest falls on earth on our first two journeys which were each after the rain season. About 10,000 square meters of water per second stream down to the 110 meters deep gorge on a width of 1,700 meters. The up to 300 meters high spray showers both camera and photographer and therefore presents a problem. It is advised to make use of the wind flow which offers a few seconds of clear view of the falls and interrupts the spray. But what does it look like several weeks after the rain season? We are curious. On our third trip we enjoy a clear view, but we do miss the elemental force, the thunderous noise and the spray. We decide to take advantage of the reduced water masses and hike along the brink of the falls. Prior to this we need to cross the border to Zambia. We park our jeep in Zimbabwe and go by foot over the border bridge to Zambia. Because of our double visa the entry is no problem. During the noonday it is a blazing 37 degrees and shade is nowhere in sight. The river bed of the Zambezi proves to be a difficulty in terms of navigation. We need to find shallow places in order to watch the Zambian fishermen. We fought our way forward until the first waterfall. Before the water rushes into the downs there is a pool. A fisherman shows us a safe way to bath in the pool, just ten centimeters before the brim. Awesome! During changing we lose our car key in one of the many deep crevices. We only have our passports with us and 30 US dollars. No credit car, nothing. Breaking into our jeep wouldn’t be a good idea, because we would have to go back to Namibia and our holiday would be over. Flying in the spare key would take three days. Our few bobs won’t pay for a room. It takes another three hours before one of the fishers works wonders and snags the key from one of the crevices, which is dark but only two meters deep. The ground is sandy. We still feel sick from all the commotion but are boundlessly thankful.

ZimbabweMonday, August 28, 2017Herzog
Copy Protected by Chetan's WP-Copyprotect.
We use cookies to ensure that we give you the best experience on our website. If you continue to use this site we will assume that you are happy with it.Ok