The 1200 km long Kamchatka peninsula made of fire and ice, a UNESCO World Heritage Site, is located in the lonely northeast of Russia. Pristine nature, smoking volcanoes, wild animals. Nowhere else can eruptive natural forces be experienced as intensely as here. 179 volcanoes, 29 of them active. They have names such as Tolbachik, Mutnowskij, Kliuchevskoi. The Kliutschevskoi is the highest of these volcanoes, having a height of 5000 meters.

An overwhelming history book on earth, a great adventure. Reason enough for a hobby photographer to face this adventure. It starts with the willingness to give up absolute comfort to the acceptance of huge swarms of mosquitos. Accommodation in the simplest wooden huts and small tents with thin sleeping mats is the result of the fact that there are no other sleeping options out there in the vast Kamchatka wilderness. 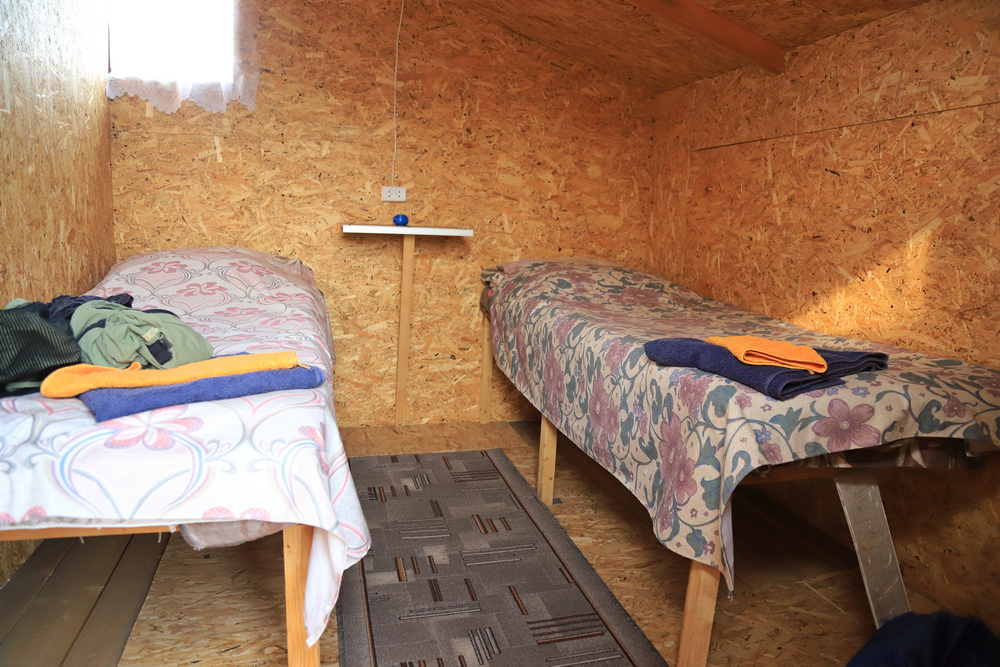 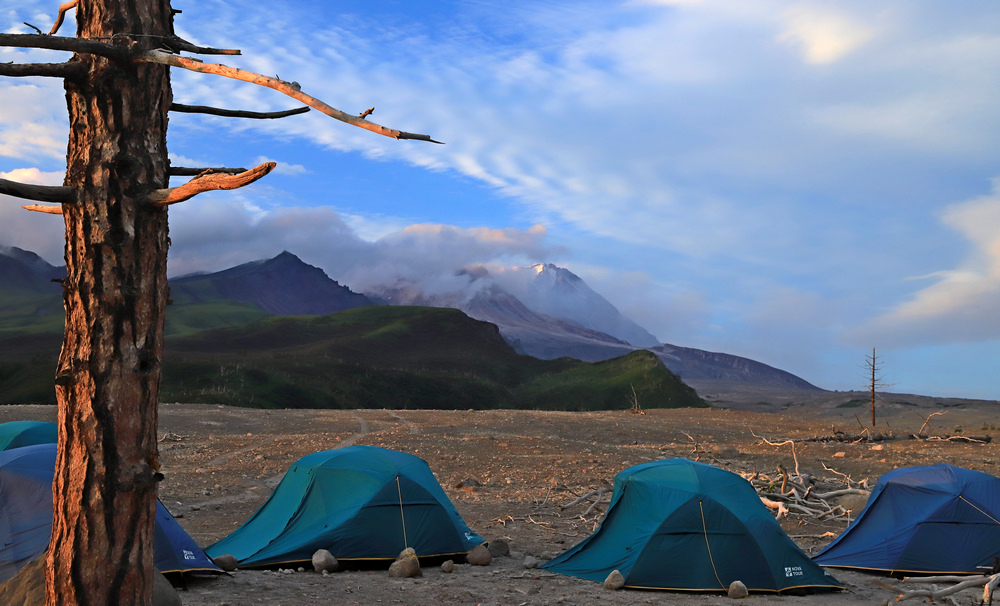 But those who have to go to the bio-toilet after dark have a special experience. 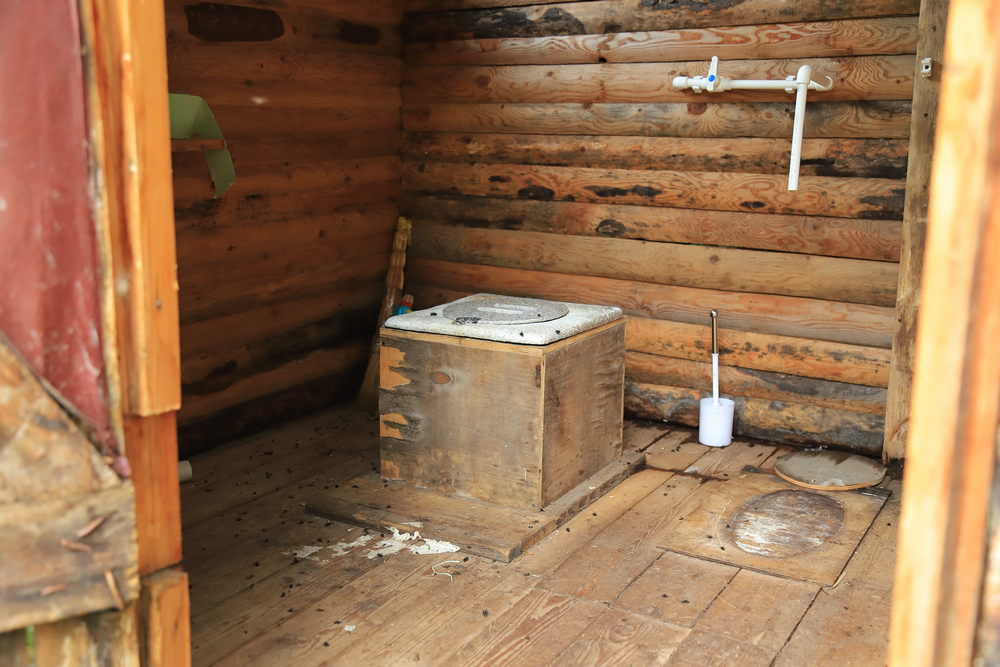 Nowhere a glow of light. Flashlight and toilet paper are to be brought along. The door cannot be locked. A visits from another human beings is the least problem, the more critical is a visit from a bear. All of this occasionally raises the question of why you do this to yourself.

The luxury-spoiled Central European quickly reaches his limits, especially when there are weather surprises like sudden downpours or a cold snap. Having your daily morning routine in the open air with ice-cold water from tubes? In such moments, it is easy to choose the minimal principle. 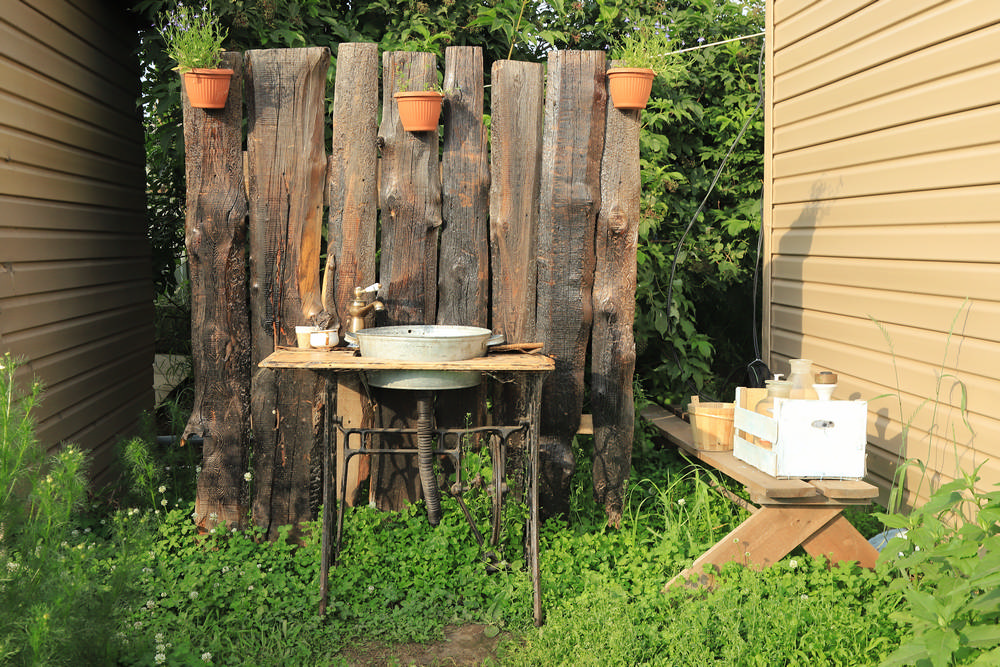 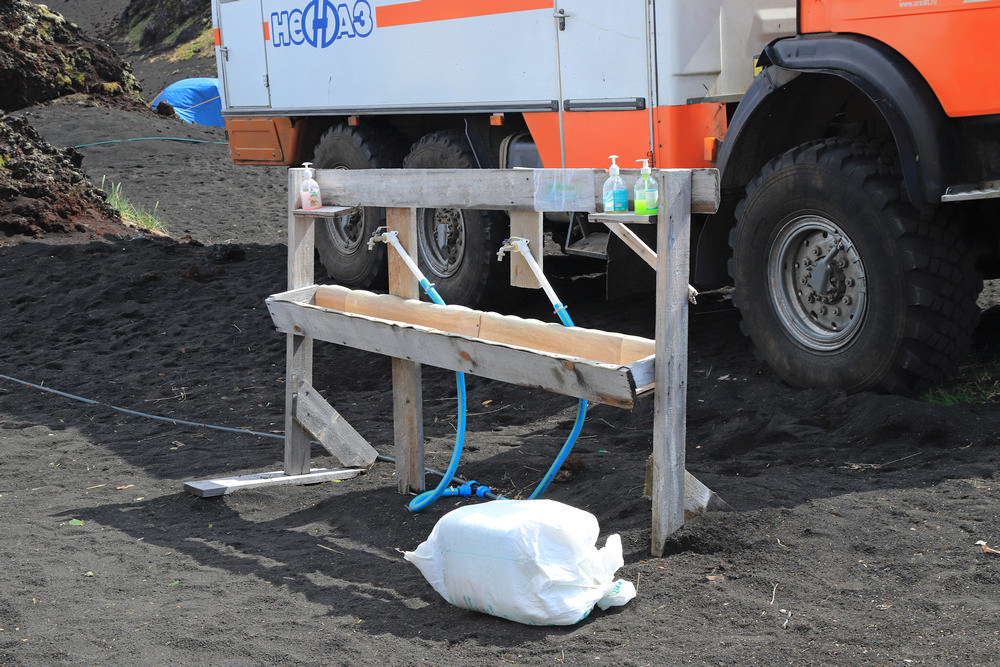 The brown bears in Kamchatka see it differently. In July, the bears plunge into the ice-cold waters in the stony riverbed to hunt the red salmon, motivated and surrounded by millions of bloodsuckers. Before the harsh winter returns, they and their children need to build up fat reserves. In these times of abundance, the furry colossi are true foodies/gourmets. First, they skin their catch, then, they enjoy the tender pink salmon fillet. 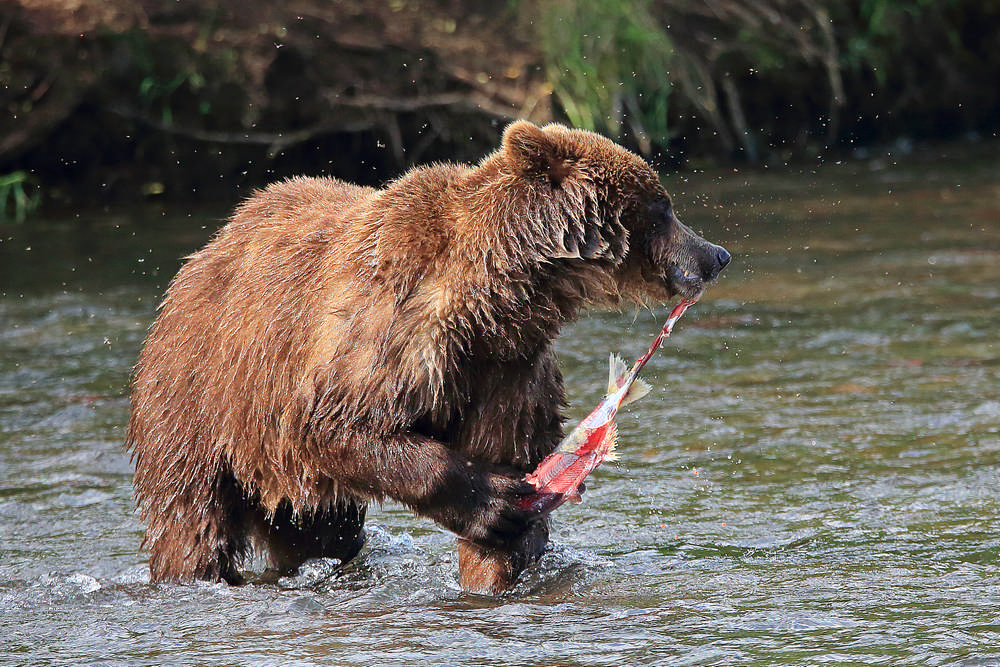 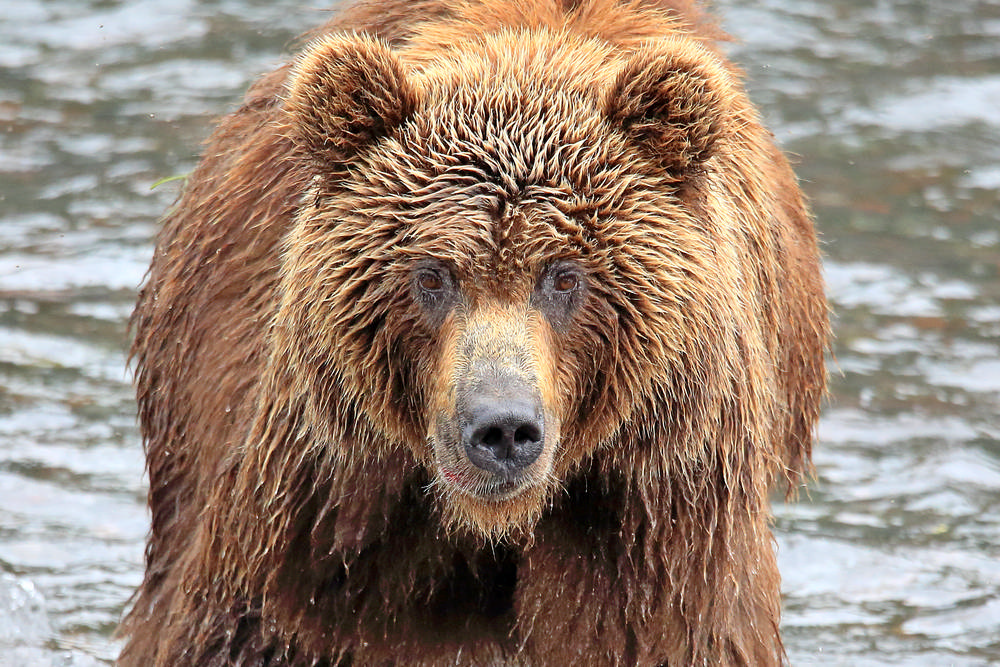 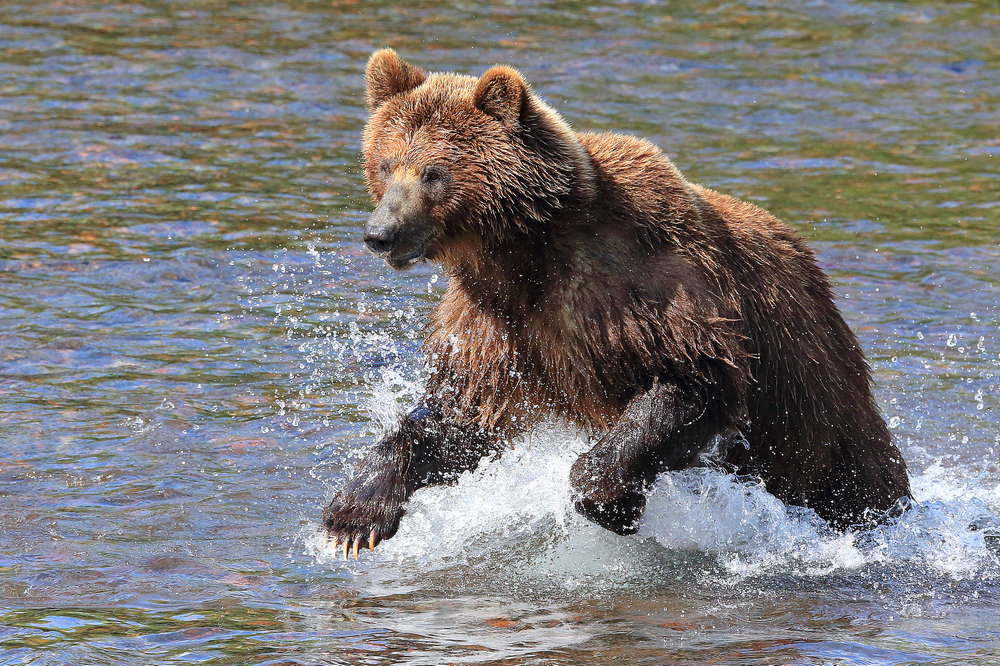 We are grateful to be able to attend this spectacle, even if the mosquitos try our patience.

Some effort is required to penetrate into the bears’ habitat in the Dvukhyurtochnoye area. It is far from any civilization and can only be reached by helicopter. 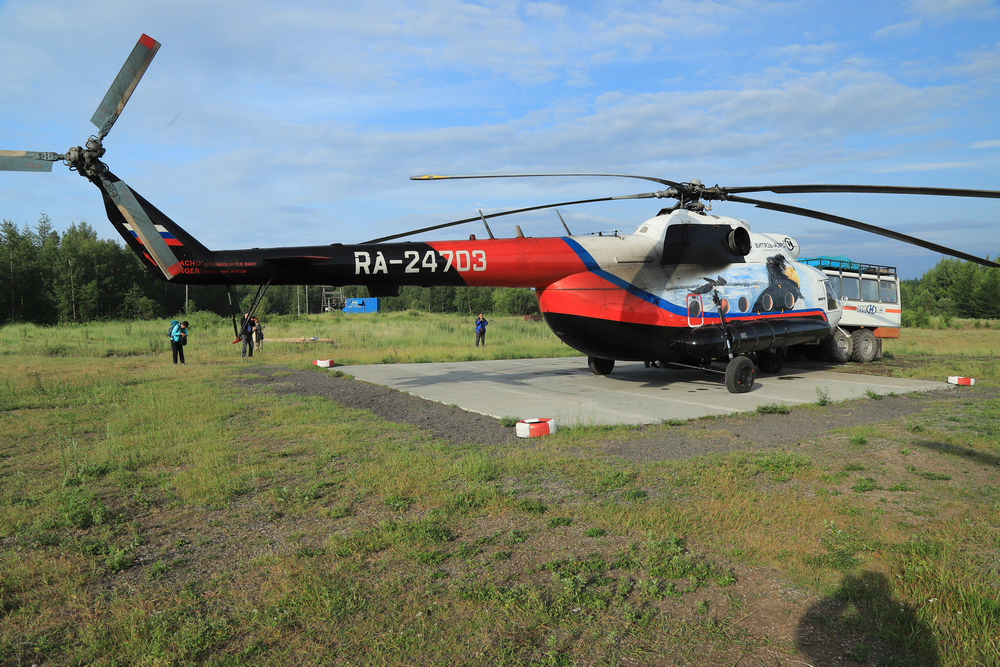 We are accompanied by armed rangers. We ask ourselves “Are you serious?” When a bear heads for our small group at high speed, the rifles are ready. The leading ranger’s face is highly concentrated and without emotion. We, the civilized, are terrified. The bear turns, less than 20 m in front of the ranger. We are relieved that the ranger has kept his nerves. A dead bear would have been a terrible vacation memory.

Even though the Kamchatka bear is the king of the animals here, encounters with other animal inhabitants are no less interesting. The endangered giant eagles with their extremely strong beak and the small, rare tufted puffin are particularly fascinating. Both species live off the coast of Kamchatka, directly in front of the Pacific Ocean with its abundance of fish.

As opposed to this, the cute European Ground Squirrel that we find in the higher areas on the volcanoes are less well supplied. They have their caves in the lava ash and live from the barren offer of nature and occasionally from a piece of bread from tourists. Despite their hunger, the European Ground Squirrel approach the human feeders very carefully. If they are in danger, they disappear into the volcanic ash with lightning speed.

Despite the tough travel conditions, the Kamchatka Peninsula magically cast a spell over us and touched us deep inside. With sadness, we look back at this most remote outpost in the far east of Russia. The hope remains to return there one day. Then hopefully with much better travel weather to get better pictures.

KamchatkaSunday, January 5, 2020Herzog
Copy Protected by Chetan's WP-Copyprotect.
We use cookies to ensure that we give you the best experience on our website. If you continue to use this site we will assume that you are happy with it.Ok