On our very first trip to Africa, we also visited a small part of Botsuana. Once on a boat in the Okavango Delta with its endless masses of water and it’s all up with us. We immediately put Botsuana on the top of our wish list for traveling. But eight years were to pass before we transpose our plan into action.

After researching online we were of the impression that we are in urgent need of GPS for some regions. Something we did not need until then, thanks to a very good sense of direction. So I occupied myself for months with this issue. Time that was missing for photos and the website. On our tour were two situations in which we were glad to have GPS: in the Makgadigkadi saltpan and while trying to pass through a flooded area in Moremi to our campsite, without taking a 300 km detour. The time commitment has paid off. Nevertheless some footbaths were not spared. 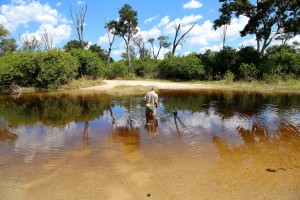 Hardly anyone can escape the fascination of the saltpans and the play of colors at sunset. Kubu Island exerts a magical attraction for many photo enthusiasts and is now relatively heavily frequented. The spot in the middle of nowhere strewn with baobabs and granite rocks has spelt a cast over us as well. The motifs make the viewer hooked. The finger can no longer be removed from the trigger itself.

Another highlight of Botsuana is certainly the Chobe region. Especially after the rainy season, the Chobe River presents itself in its full water splendor. Its surface is then covered with water lilies and looks like a sea of flowers. A feast for the gray giants. A sundowner ride with a (small) boat is a must for all nature and animal lovers. The same applies to the Okavango Delta with its animal wealth and its meandering waterways through rushes and water-lilies thick carpets, a challenge for any boat screw.

Particularly impressive are the moments in which the word “animal proximity” objectifies. No fences around the camp sites means “feel free” for animals and humans. We clearly felt that, when we innocently devoted ourselves to dinner. Suddenly we heard a noise behind us. We froze and looked up at a huge bull elephant, which stood about six meters behind us and was also engaged with food intake. 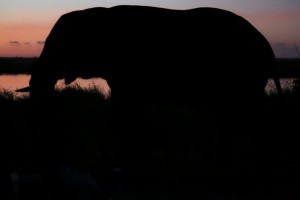 He seemed relaxed. We are not. Twilight has long started. How good do elephants see in the dark? Better than during daytime. But what did that mean for us? In slow motion we retreated behind an old tree and obtain our observation post. Does an elephant like cucumbers, tomatoes and green salad? This one obviously not. Fortunately for us and our stomachs. The elephant decided without asking to spend the evening with us.

He munched and bathed extensively and we listened intently into the night. We waived the campfire this evening. We were not sure whether the elephants would like it. A special kind of experience and not the only one. At the end we looked as relaxed as the animals. 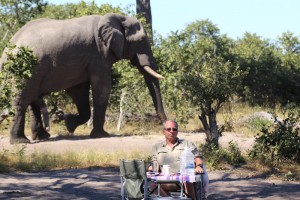 BotsuanaSaturday, September 2, 2017Herzog
Copy Protected by Chetan's WP-Copyprotect.
We use cookies to ensure that we give you the best experience on our website. If you continue to use this site we will assume that you are happy with it.Ok