Assante sana! Kenya has been a popular holiday destination for many German travelers for a long time. White beaches on the coast near Mombasa and safari trips to one of the national parks beckon the tourists. In the end no tourist wants to fly home without a picture from a lion or an elephant. Maybe this is one of the reasons why Kenia was one of the last destinations in eastern Africa that we visited. We had great respect for all Kenia enthusiasts.

Today we know better. Of course no one has the Massai Mara on its own, especially not during the big wildebeest migration at the Mara river. Then solitude is a luxury. 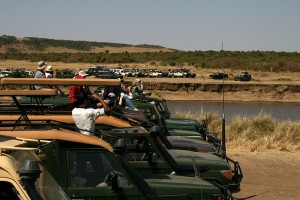 But in regions like Mount Elgon or at Lake Victoria in western Kenia, travelers are rather rare. You don’t have to be surprised when the menu offers ten dishes but only one is available. Everything is very relaxed. If you want to eat with cutlery might as well tell the service and don’t be shocked when the other guest don’t do so. Outside of the national parks there are good chances to get to know the country and people.

Nonetheless our first twelve days in the Massai Mara convinced us, that Kenia is a paradise for wildlife photographers, if one is interested in African wild animals. What dulls the grand experiences with animals is the fact that one can not be at all spots at the same time. But in the evening one has enough opportunities to talk with like-minded people. Then you know what you have not seen, or the others. 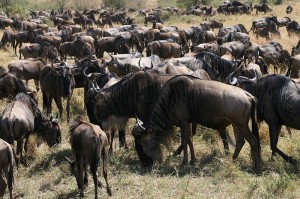 It is sensible to focus on mainly the photography and organize a good guide beforehand, who knows the area and the animals like the back of his hand. Also reasonable is a jeep for individual use. We know the dilemma with independent travels only too well: we are on our way from point A to point B. The driver is concentrated on the ambitious ground, while the passenger imagines having the situation under control. Apart from the lack of space for the photo equipment in the driver’s cab. Suddenly an interesting photo situation is revealed. Now the passenger has to act quickly on the small seat and the driver has to try to slow down at the same time. This seldom works, especially not on sand and mud tracks. The trouble is predestined in such situations. Often it is not easy for us to decide between driving on our own with solitude or the luxury of a driver with a bit of conviviality. So far the first variant won most of the time. 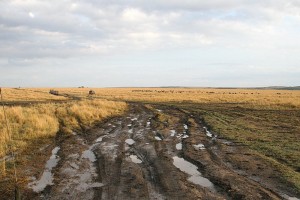 Meanwhile we have been to the Massai Mara several times. Always with a guide and a jeep with a lot free movement and space for our equipment. After Canon asked us, when cleaning the camera, where we have been (apparently everything was extremely dusty), we bought a third body. Now we don’t have to change the lens so often. Our camera will hopefully thank us for this with a long lifespan. 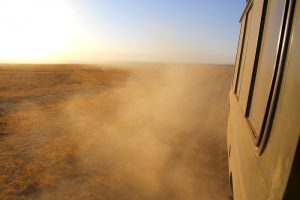 While trekking in Kenia, dust is no challenge. On those occasions the question is whether I take all of my equipment with me, because one has to carry it a few thousand meters high. It becomes even more difficult when we shoot in different places, one goes trekking and one goes on a safari. Then the fights over the landscape lenses erupt. Meanwhile we have remedied this and increased the sale of our favorite photo shop in Düsseldorf. This also means more equipment and more weight. When being in the Massai Mara and seeing a cheetah spot with ten or more jeeps, we often wonder what the others do with their hand and flight luggage. In the neighbor vehicles often 20kg of equipment per person is gathered. 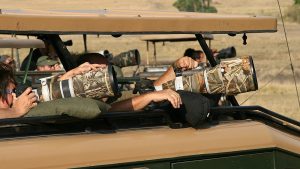 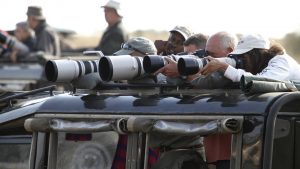 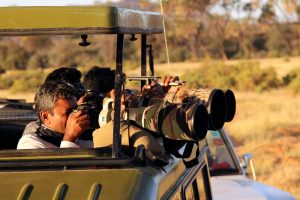 This is no longer about the animal but who has the most expensive camera, the most massive lens and therefore the most dough. In these moments it is often more fun to watch humans than animals. Sadly we can’t know what kind of thoughts take place in their minds. The sight of the neighbor’s bigger telephoto must cause real dramas inside their heads.

We are jealous when seeing the film team from BBC in the Mara. Spending three months here and filming animals from day to night, a permanent feeling of happiness! And this also with outrageously good equipment. 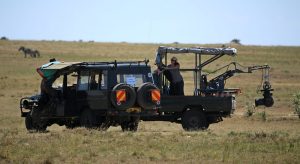 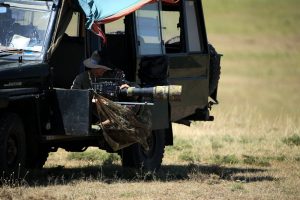 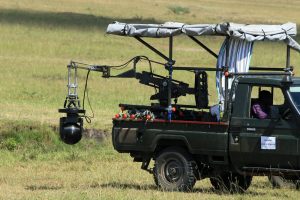 We are so fortunate to watch the film recordings about cheetah mother Maleika and her offspring in close proximity for one week. 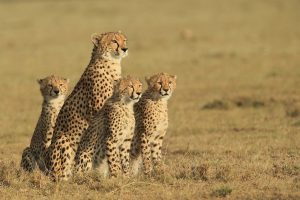 Maleika became famous because she loves jeeps. With pleasure she climbs on jeep roofs and enjoys the view over her hunting ground. If the tourist sticks out his head on those situations, he comes very close to a wild cheetah. For both sides this is not without risk. Especially when the offspring copies their mother. Hyenas are clever and sneak around those standing vehicles. At dawn the guides have to return to the camps. Maleika and her kids have to leave “their” jeep and are now at the mercy the waiting hyenas. In this way Malaika has already lost some cubs. For tourists this is fun, for the cheetahs life-threatening. A doubtful enjoyment. 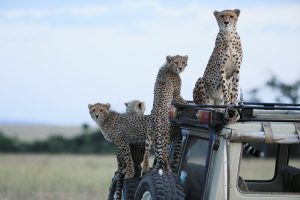 KenyaSaturday, September 2, 2017Herzog
Copy Protected by Chetan's WP-Copyprotect.
We use cookies to ensure that we give you the best experience on our website. If you continue to use this site we will assume that you are happy with it.Ok