Hong Kong is a mega city of superlatives with unbelievable dimensions. But it consists of more than street canyons, crowds, huge shopping centers and the smog that’s being blown over from China in unfavorable wind conditions. Despite having the highset population density worldwide, Hong Kong is one of the greenest metropolitan regions in Asia and has the lowest crime rate. Hong Kong is a City where tourists should bring enough time with them, especially if you plan on visiting Macao, THE Centrum for gambling in Asia.

Every evening at eight o’ clock you can see an unique lightshow around the Victoria port on both sides of the strait. For fifteen minutes over 40 sky scrapers illuminate the harbour with lasers, LED-lights, searchlights and floodlights. With this Hong Kong still holds the world record for the world’s permanent longest light and sound show. 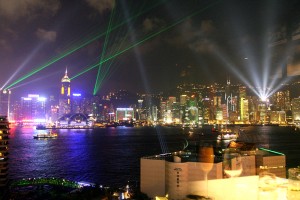 During the first few hours in Hong Kong most visitors are overwhelmed and often overstrained. Especially those, who use the public transport. For natives, the public bus is one of the most important means of transport. There are endless numbers of bus routes, which create an impenetrable network for tourists. But driving on a double-decker bus through town helps getting an overview about the various city districts. Cheer up! In a pinch you can just drive the way back from which you came from. 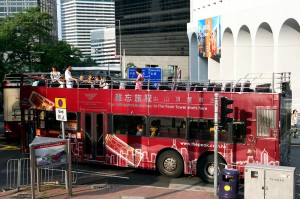 A Relaxing experience for us is a trip with one of the many low-priced ferries. Exploring the surroundings of Hong Kong via ferry is just fun. 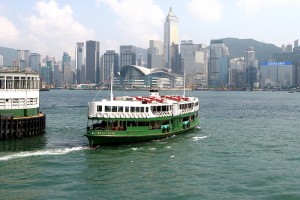 Also very recommended is a trip to Lantau Island. This Island is very scenic and houses the Po-Lin monastery with one of the world’s biggest sitting Buddha statues made out of bronze, the Tian Tan Buddha. The Buddha is enthroned on a mountain which you can get to trough a staircase. Up there travelers are presented with a magnificent view over the island and ist sandy bays. 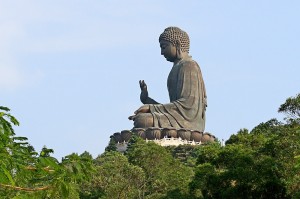 This time we decided to spend a few relaxing days on Macao. The Macanese language is only spoken by around 4,000 Macanese people. Living there gives you a good chance to grow old, since Macao has the second highest life expectancy with 85 years.

And this despite the fact that the hole city is round the clock in a contagious gambling fever. In China gambling is forbidden and in Hong Kong only horse races are allowed. So one is not surprised that the Casino income on Macao contributes to around 60 percent of the gross domestic product, which is also a high economic risk. Nowhere on earth is so much money earned with gambling than in Macao. 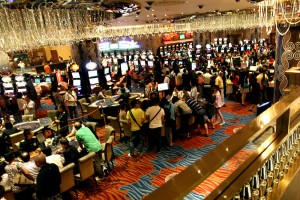 The former role model Las Vegas can long since not keep up. On the relatively small Island you can find more than 35 casinos. In 2013 they made six times as much turnover in comparison to Las Vegas. No wonder one stumbles over newspaper headlines like “Macao degrades Las Vegas to a province casino”. What is also special about Macao is that gambling takes place around the clock. Gambling tables are already full during a Monday late morning. Chinese visitors mostly wear casual outfits: T-Shirt and slippers. We had to get accustomed to the strange clothing style in casinos there. Also the minimum stake is 30 Euros in the form of one single chip. It is only logically that for instance in April 2014 a lush 2.83 Billion Euros profit was gained.

Macao is also an eldorado for gambling because it is easy to launder illegal money, that’s been smuggled out of China. This fact is a thorn in the side of the Chinese government. This raises the question, what will happen to the over 35 casinos on Macao if gamgling is made legal on the mainland.

Hongkong & MacaoThursday, June 1, 2017Herzog
Copy Protected by Chetan's WP-Copyprotect.
We use cookies to ensure that we give you the best experience on our website. If you continue to use this site we will assume that you are happy with it.Ok