There are animals, whose presence on many travelers to refrain entirely in their lives. These include lots of crawling beetles, spiders, snakes and similar creatures. That is why it is often difficult for us to share our enthusiasm for cobras or mambas with others. Regardless of the fascination we have very great respect for poisonous snakes. When approached us in the Okavango Delta a Boomslang at eye level up to 2 meters, we were about her going more pleased than their attendance. Previously, however, there were still a few photos ans the danger is forgotten for a few minutes. 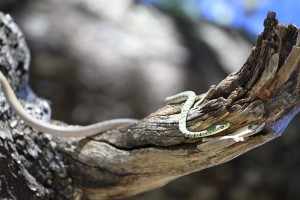 When it comes to snakes, we are always amused by the panic fear of the locals in front of them. Snakes are creatures of the devil, even the non-dangerous ones. People hear that on Sundays in the preaching of the preachers. When we are off-road with our guide Wilson in a little-populated game reserve in northern Kenya, a black mamba meanders over the stony path just before the jeep. With her head up, she has an amazing pace. We call “stoooop” and Wilson drives another 50 yards before slowing down. He only reluctantly stops. Excited, he tells us that snakes are sometimes thrown into the engine compartment and can be a risk. He would rather continue. We do not. In a bush we see the Mamba. She flees in fear into a bush. We consider whether to get off because of a photo. Wilson looks at us horrified and thinks we’re crazy. He tries to keep us from our plans. Since the grass is very high and mambas are very fast, we finally refrain from a spectacular encounter. The nearest hospital is 6 hours drive away. That would not be enough in an emergency. We would like to meet – with the appropriate safety distance – a cobra. We find these snakes beautiful. One morning, Wilson told us about the nocturnal hustle and bustle in the driver’s quarters. A cobra had lost his way. Most likely, she was after the mice living there, not the humans. Unfortunately, she had to pay for this trip with her life. Surely this confrontation would have been peaceful to settle. Killing is usually not a solution for us. With one exception, but more on that later. Cobras we have not seen in East Africa until today, but in Namibia. Unfortunately, we accidentally killed a cobra. A cape cobra lies in the bright sand, right on our track. The braking maneuver is unfortunately too late. It is caught by one of the wheels and thrown to the passenger door. 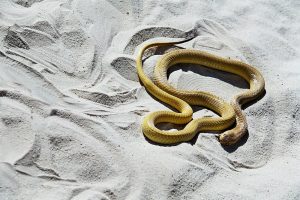 With the other cobra we have more luck, she survives the encounter with us harmless. We as well. In the jeep with the open window. She has no desire to spit. Nevertheless, we dare no frontal photo, only in profile. Better is better. 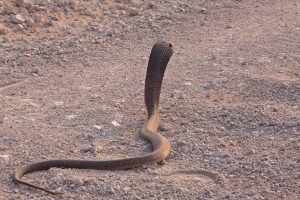 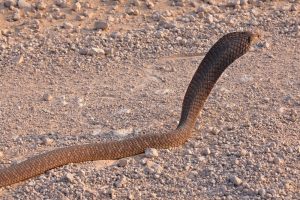 But even our animal interest knows limits. Anyone who has ever spent the night with a few thousand (airworthy!) Beetles in a sleeper cell of 2 x 3 meters, 2 meters in height and the forcibly for several nights, can certainly understand us. At the sight of these masses put our “will to survive” and thus the bloodlust for three days. We catch the pests everywhere: in the pillow, in the cooler, in the photo backpack. If one is dead, 100 seem to come. With each newly discovered beetle, animal lovers will find antipathy and motivation to eliminate. For three days there is a war in our jeep and thus the state of emergency. 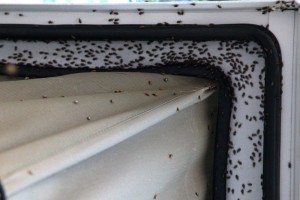 As we observe much prefer the colorful small lizards, which are characteristic of many areas of Africa. The viewer here offers a seemingly endless range of colors with a variety of color combinations. We also have a lot of fun with the furry red-brown caterpillars in front of our terrace, right on the west coast of South Africa. Skillfully, they climb the soil-covering plants. Their leaves are thick and very juicy. A feast for the 8 to 10 centimeter caterpillars. In no time at all they eat out leaf by leaf. The eating tools do not stand still. It quickly becomes clear: when photographing it does not always have to be the big animals. The little ones are often more demanding, which is not only due to the sometimes extremely unhealthy contortions when photographing on the floor.

Reptiles & InsectsThursday, June 1, 2017Herzog
Copy Protected by Chetan's WP-Copyprotect.
We use cookies to ensure that we give you the best experience on our website. If you continue to use this site we will assume that you are happy with it.Ok