When we started to make wall- and desk calenders, we first wanted to gain experience. We decided to take photos of mountain gorillas and mixed apes for our photo scene, since we thought the demand was low for those. At least that is what we thought. The very small range of primate calenders online seemed to confirm our opinion. But the very opposite was true, apparently we shared our fascination for Gorillas & Co with many people.

This enthusiasm brought us to Rwanda. Rwanda is the country of 1,000 hills and home to the mountain gorillas. They belong to one of the scarcest great apes in the world. In Rwanda the last of their species live. The population has increased since the civil war in 1994 close to 900 animals, but mountain gorillas are still an endangered species and therefore are being watched by gamekeepers round the clock.

Mountain gorillas live in 3,000 meters altitude in the Virunga Mountains, close to the border of the Democratic Republic of the Congo. The access to their habitat is, especially after rainfall, very difficult. 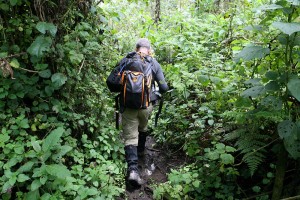 Due to the chaos of war, Rwanda was said to be an unsafe travel area. All the more we are happy, as we sit in a plane from Dar Es Salam to Kigali, the capital of Rwanda. We could hardly believe our luck. In 24 hours we will have the chance to see those unique creatures, hopefully also one ot those heavy-weight silverbacks. Such a friendly colossus weighs up to 200 kg, which is certainly formidable.

We have the exceptional luck to see them in their natural habitat. On site we have good conditions for photographing. The eleven-strong gorilla family is bathing in the sun on a meadow for eating and then napping. 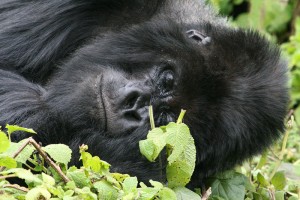 We are only 5 meters away from the scene and cannot grasp the situation. It is even more phenomenal than we would have hoped for.

However we know now what it means to get carried away by ambition and enter the territory of a pregnant gorilla lady, even if only for a few centimeters. With shock we forget to photograph in those few seconds. Luckily our guide can soothe the angry gorilla mother in her language. The communication in gorilla language seems to work, as the enraged gorilla desists from us.

The visit to the gorilla family with both of their silverbacks and especially their four feisty kids will always be remembered by us. To date this was our most emotional experience with animals. We will think back often and in deep gratitude to this very “human-like” and emotive encounter and see it as a privilege.

Maybe the fee for one hour with the gorillas seems unreasonable high, but the effort to keep those animals safe is enormous. Keeping this in mind we would unhesitatingly pay more for a visit.

Besides the mountain gorillas there are other attractions such as the golden monkeys. They are a subspecies of the blue monkeys and only live in dense bamboo forests close to volcanic mountains. Golden monkeys are also endangered, the animals living in the Virunga Mountains are deemed as the only survivable group of this rare animal species. Those guenons can move very quickly in the dense bamboo forest and therefore are not easy target, even for wildlife photographers. They too can only be visited for one hour, it is worth it!

PrimatesThursday, June 1, 2017Herzog
Copy Protected by Chetan's WP-Copyprotect.
We use cookies to ensure that we give you the best experience on our website. If you continue to use this site we will assume that you are happy with it.Ok